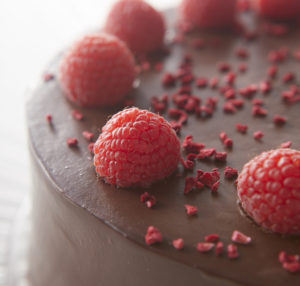 Learn how to make our deliciously decadent Chocolate Raspberry Velvet cake, which also happens to be vegan! The rich chocolate cake has raspberry jam baked into the sponge and is sandwiched with raspberry compote, then lathered in a silky dairy-free chocolate ganache and finished with fresh and freeze dried raspberries.