Who ate all the pies? The Nations 2020 Mince Pie Eating Habits Revealed

It’s that time of year for everyone’s favourite festive treat, and we’re here to uncover which region eats the most mince pies, how early people start to eat them and how many thought they actually contained beef mince meat – the results may surprise you!

Which regions eat the most mince pies?

At Konditor, we take mince pies very seriously…after baking them for over 25 years can you blame us?! So, we took the time to survey 2000 people across the nation to find the answers to the most pressing mince pie related questions. The results revealed that on average, people in the South-West are the mince pie eating champs! Eating 24 pies per season, they dominated those in the East of England and London who only eat 16 mince pies over the holidays.

The Scots are also big fans of the tasty, fruity pie with an average of 21 mince pies eaten per person per season. After a few calculations, we discovered that the national average of mince pies being consumed every season is 19 per person. Because of this, we estimate that around 1 billion mince pies will be eaten this year nationally! 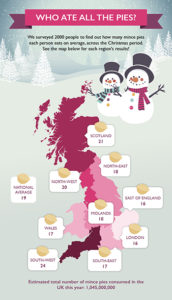 The nation knows how to make a mince pie!

It’s the age-old questions that confuse many…what ingredients are actually in a mince pie? Well, we’re happy to report that most of the people we surveyed got it right with 93.4% saying mixed spice, 93.1% saying sultanas, , 87.8% saying mixed peel, 67.9% saying eggs, and 60.3% saying apple.

But, not everyone was successful. So before tucking into a mince pie lovingly made by your mother, brother, grandma, niece or nephew this Christmas, please be wary. 51.2% of the people we surveyed thought mince pies were made with lemon juice, 6.2% thought cranberry sauce was included, 0.7% believed gravy was an ingredient and 1.1% of the nation thought you should include onion in your mince pie.

Shockingly of all, 3.6% of the people we surveyed had a Rachel from Friends moment and thought beef mince belonged in their mince pie. While it’s not the highest number, it’s still a little worrying! 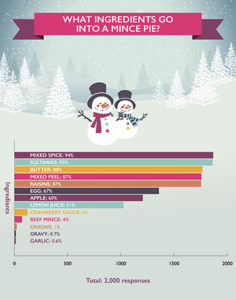 How early does the public eat mince pies?

We usually see mince pies hitting the shelves in September and while some people flock to add them to their baskets, others walk past rolling their eyes and muttering ‘far too early’. Out of the 2000 people we surveyed though, we discovered that 52.8% think mince pies should be eaten all year round! 39.6% of people like to save their first mince pie for the first week of December while 7.6% aren’t a fan and never eat them, which, quite frankly, we just don’t understand. 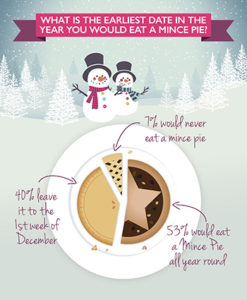 How quickly do we all eat our mince pies?

Something else we were curious about is how quickly people eat their mince pies. Do they savour every last bite and make an event out of it? Or scoff them to get all the sweet, pastry goodness as fast as they can? From our results, it seems the latter is most popular with 37.2% taking 30 seconds-1 minute to eat them, and 30.9% of people eating them in 1-2 minutes. 14% of people managed to eat mince pies in less than 30 seconds and we don’t know whether to be impressed or disgusted by that fact. But, only 7.9% spent more than 4 minutes eating them. This just goes to show that mince pies really are irresistible. 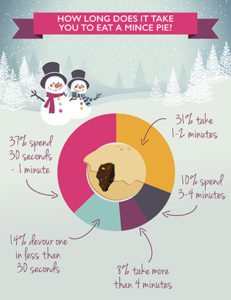 Hungry after reading all of this? Order yourself some delicious Konditor mince pies and take a look at our top tips for serving the perfect mince pie. 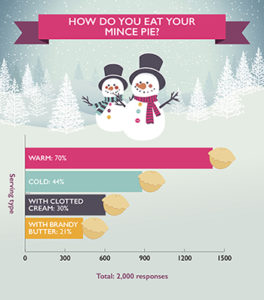 And, last but not least, Merry Christmas!